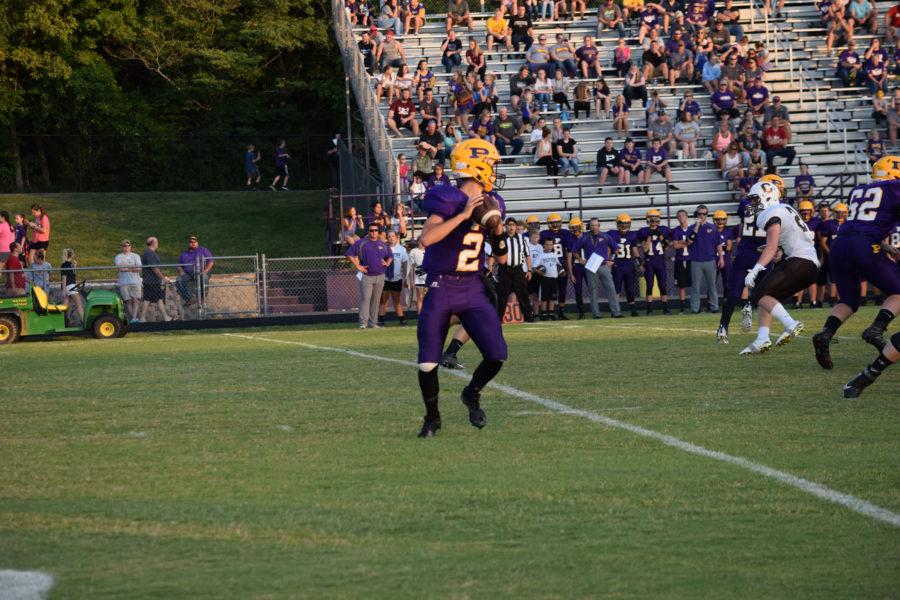 Millions of students across the country participate in high school athletics. In fact, there are approximately eight million high school athletes in the United States. The friendships formed, memories shared and life lessons learned through sports is what draws kids to play. Some of the most cherished memories of students can be gained through their athletic careers.
For senior quarterback Garrett Vincent, this is most definitely the case.
“My best memories are just being in the locker room with my team. A lot of times, people take for granted the bonds that are formed when people spend so much time together like teammates do. My teammates really feel like family, and it’s really something special,” said Vincent.
Vincent has participated in football for ten years and has been around the game his whole life. With his father being his coach and his entire family religiously devoted to watching football, Vincent has plenty of experience with the game. Playing for Paoli ever since third grade, Vincent has developed a passion for the game and the desire to win.
“My favorite thing about playing is winning. I love to win and to see our hard work pay off. It’s especially sweet to win now because of how much success we lacked when I was an underclassman,” said Vincent.
High school teaches students a lot of important things, but some just cannot be learned in the classroom. Football has taught Vincent many important life lessons he will always remember.
“It has really driven skills and characteristics into me that I could not have gotten on my own. One of the main things is accountability. In the Paoli football program, accountability is huge. The coaches always talk about doing your one-eleventh on the field for success and that’s a great way to teach young men how to be accountable. I’ve also learned how to be a leader on and off the field and how to relate to lots of different personalities,” said Vincent.
During his junior year, Vincent suffered an injury early in the season that shattered his hopes of playing another game that season. After receiving the news that his collarbone was officially broken and he would be missing the rest of the season, Vincent was absolutely crushed.
“My injury completely devastated me last season. I felt like I worked so hard to be where I was only to have it all taken away from me. A big thing it taught me was how to be a good teammate no matter what. Even though I couldn’t contribute on the field, I knew that my role on the team was a big one. I just turned into a cheerleader and sometimes a coach. I tried to encourage as much as possible and to help the guys who had to step in and take my spot. It also just made me really excited for this season and really determined to make it a special one,” said Vincent.
This season being Vincent’s last year at PHS heightens his determination to make it spectacular. One last chance at victory has Vincent and his senior teammates working extremely hard towards a title.
“My goals for this season have been the same since day one: win every championship possible,” said Vincent.
With the team already winning the Patoka Lake Athletic Conference title, Vincent is accomplishing his dreams. As the season is coming to an end, Vincent knows he will miss it every day.
“I really try not to think about this being my last season too much. I have loved football since I was able to walk, and the fact that it’s almost over and gone is really sad. I know that I’ll never be a part of anything like Paoli football. It’s cliché, but there is not much like it. Football has been such a huge part of my life, and it really makes me sad that in a few weeks I will never play another down,” said Vincent.
Every year, senior athletes will touch the field or court one last time, and the outcome for Vincent is no different. After finding something truly special, it’s heartbreaking to grasp the reality that in a few weeks, it will be gone. Come support Vincent and his teammates as they play what could be their final game for PHS on Friday, October 20.