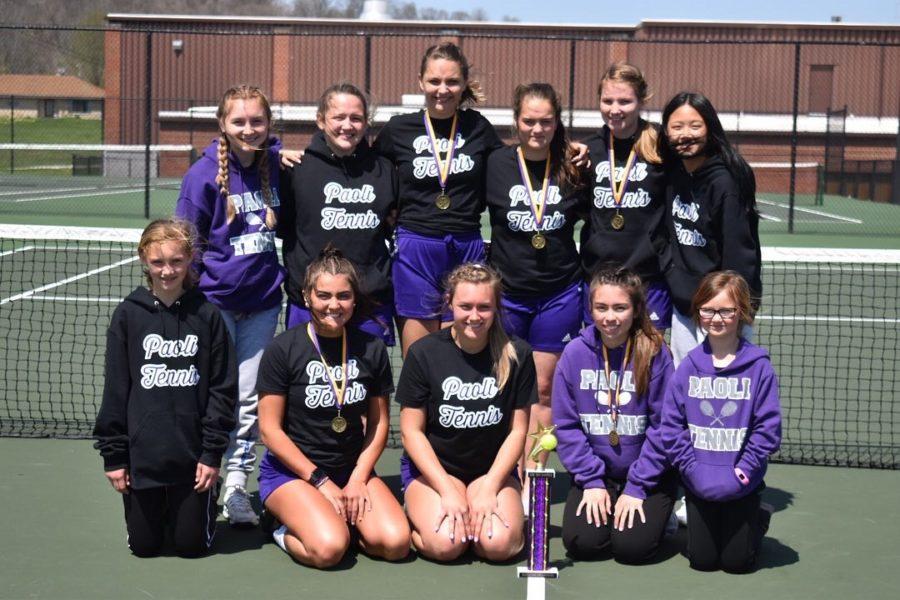 On Saturday April 16, the Rams Varsity Tennis team hosted the Paoli Invitational, which included Paoli 18, Barr-Reeve 10,  Madison 7, and  Tell City 0. The Rams once again come out with a win.

In round one of the tournament, each girl or team won against their opponent.

“I was really proud of how all the girls played across the board.  We had good ball movement in all positions and played smart points,” said Head Coach Tyla Whitfield.

“The biggest challenge I faced in my match was my nerves. It was my first tournament as number one singles, so I knew I was going to be playing girls that were really good,” said Warren.

The Lady Rams pose after the tournament with their medals. Courtesy Photo

“Our team faced a lot of tough opponents this weekend but our determination never faltered. We learned something from our wins and losses, only preparing us more for the sectionals,” said Bowles.

“The biggest challenge I faced was probably my mental toughness. Most of the game I doubted myself and how well I could play. I didn’t necessarily step out on the court thinking I was actually going to win, I was more nervous than anything,” said Moffatt.

The last win of round one belonged to senior Chelsea Deweese and sophomore Micaela MacDonald, who defeated Barr-Reeve’s Kaitlyn Wood and Alli Robinson, 6-4, 6-4.

In round two, the Lady Rams pulled in four more wins.

“Warren won both of her matches at one singles so she won a medal for her flight, the position of no. 1 singles,” said Whitfield.

“I was able to really track the ball and read the rackets of both of the opponents I faced. My Tell City opponent really allowed me to slow my strokes and work consistency over speed, whereas with my Barr-Reeve opponent I had to use speed, strategy and consistency,” said Bowles.

Moffatt and Brown lost to Sydney Swartzentruber and Dyan Cecoursey, 2-6, 4-6.

The Lady Rams will go on to face the Eastern Pekin Musketeers Monday at home starting at 5 p.m.