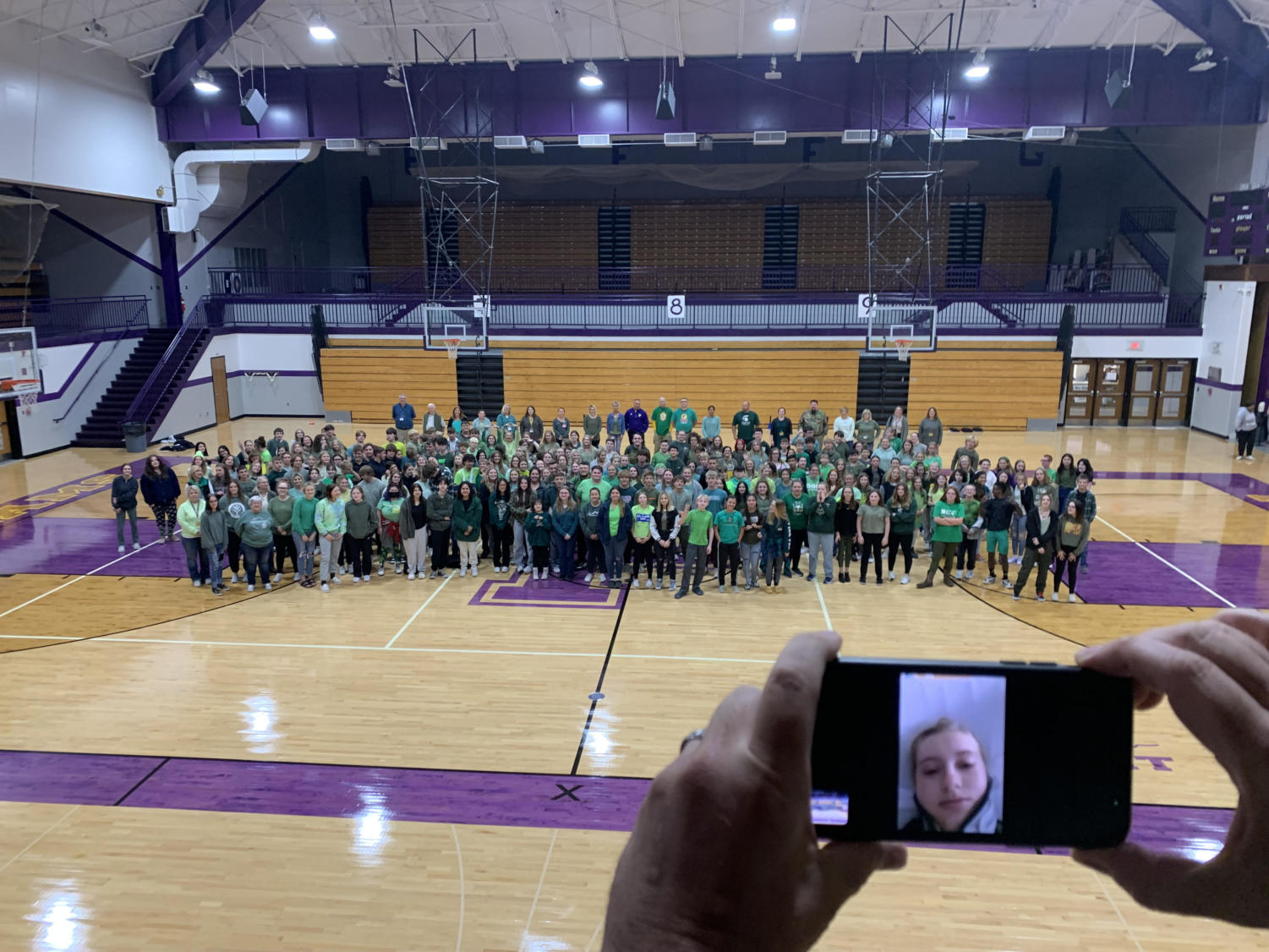 Students wore green in support of Nova after her accident. (Courtesy Photo)

Students wore green in support of Nova after her accident.

On Friday, October 14 the life of senior Nova Nichols changed forever when she was in a car accident just south of the school.

Below is her story and her journey back to PHS. This story will be added to throughout the year to add Nova’s perspective starting in January.

A Cheerleader Misses the Bus

It is Friday, October 14 and the Rams are headed to North Knox to face the Warriors. On the last day of Fall Break, the varsity cheer squad is waiting on the bus to leave for the game. The bus leaves at 4:30 p.m.

It is 4:35 p.m. and senior Nova Nichols is not on the bus. A call is made to her father and then her mother. No Nova.

Nova’s mom, Heather, gets in her car to travel the path her daughter would have driven.

Back on the bus the cheerleaders watch a fire truck pass the school and the phone rings with bad news. A helicopter passes over the bus headed to the scene of an accident. They know where Nova is. The accident took place half a mile from her house on a West County Road 150 South.

“I don’t remember most of what happened. I do remember that I was at the top of a hill and there was a car coming at me in the middle of the road, so I swerved to not hit it. I overcompensated and I don’t remember the rest,” said Nova.

While Nova’s memory is still foggy, her mother provided information.

“When I arrived at the scene, the police said speed was definitely a factor in this accident. She left the road and went airborne. She hit the trees about 10 feet in the air. She was pinned in the vehicle on every side of her body. The first person on the scene got a piece of mail from a nearby mailbox to tell the emergency response where the accident occurred. Then he made a second call for the jaws of life team and a third call for the air evacuation team,” said Heather.

After successfully being removed from her vehicle, Nova was airlifted to U of L hospital in Louisville, Kentucky.

“The helicopter ride from Paoli to Louisville took about 20 minutes. The only people on board were the pilot, one medical personnel and Nova. The medical person on board was sending me updates throughout the flight,” said Heather.

Upon arriving at the hospital, she was admitted to the trauma center. There, they assessed her injuries and addressed the most life-threatening ones first. After leaving the trauma area, Nova was relocated to the Intensive Care Unit (ICU). Once she was in the ICU, doctors and nurses continued to monitor her injuries. She was hooked up to several machines and taken to surgery. The medical team had to perform two operations to repair her humerus bone and jaw. Medical professionals had to give Nova four pints of blood to make up for internal bleeding.

“She sustained lacerations on her spleen, kidney and liver. She shattered her humerus bone, jaw, sternum, clavicle and front neck bone. She had spiderweb fractures on five ribs on her left side and broke two others on her right side. She also broke her back in three places and her neck in two places,” said Heather.

After being moved out of the ICU, she was moved onto a floor devoted to victims of vehicle accidents.

“She was told that there was a football player next door that complained a lot more than she did, but he did not have nearly the injuries that she had. Once she moved out of the ICU, she wasn’t hooked up to as many machines,” said Heather.

Nova remained in the hospital for over a week to recover before she was allowed to head home to continue her recovery.

According to Heather, the ride back to Paoli was scary.

“She was given a lot of pain meds, but we were all nervous about putting her back in the vehicle. It was a relief as well to know that she was going to be returning home,” said Heather.

The Road to Recovery

When she got back, the man who called the Jaws of Life and the stat flight visited Nova. Many of her friends went and saw her as well. One person who sticks out to Nova is Art Teacher Chris Jones, who is also a family friend. He has visited Nova at least five times so far.

“It means a lot to me that Mr. Jones has been with me through so much from sophomore year and he continues to be by my side during my time away from everybody,” said Nova.

At school, a dress-up day for Nova was held asking everyone to wear green, her favorite color to support her recovery. A moment of silence was held the football game the opening night for Nova, the night she first returned home.

Life now is very different for both Nova and her family. She has been unable to attend school and will be unable to cheer for the remainder of the year.

A few things Nova is missing is seeing Economics Teacher Neil Dittmer in class, driving her car and other classes like finite and speech. She is thankful for those who have reached out to her to offer their support.

“People sent care packages to me and someone wrote me a story on Hello Kitty paper, so thank you to everyone,” said Nova.

Another thing Nova misses is spending time with her pets. With her injuries, she is unable to pick them up or care for them. As a result, her dog was relocated to stay with a friend for the time being. She has felt a few other changes in her house as well.

“Life now is filled with follow up visits. It is amazing to see her growing stronger every day. She has come through so much in a relatively short amount of time. I am so grateful to have her here. She still can’t go up stairs, and we still have to be hyper vigilant of her internal injuries,” said Heather.

On Tuesday, November 15, Nova was cleared by her doctors to return to PHS — Nova officially returning the following day.

Your donation will support the student journalists of Paoli High School. Your contribution will allow us to purchase equipment and cover our annual website hosting costs.

Thank you for your donation!