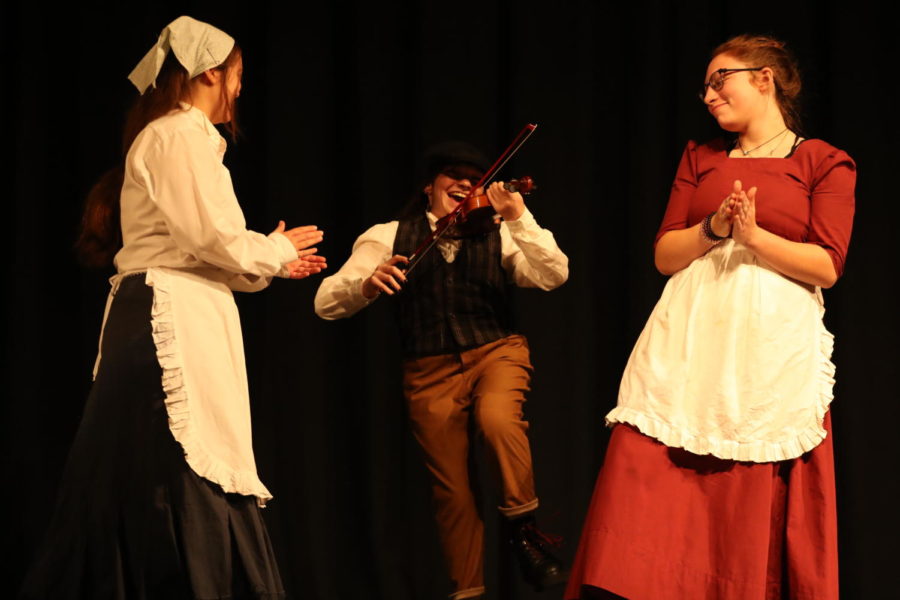 Senior Ellie Sims dances around the stage as the fiddler.

Drama students run through their scripts during a play practice.

Fall Production in the Works: Behind the Scenes of “Fiddler”

The Drama Club’s annual fall production is in progress. This year, the musical is “Fiddler on the Roof.” It takes place in the small village of Anatevka. The story centers on Tevye, a poor dairyman, and his five daughters. With the help of a colorful and tight-knit Jewish community, Tevye tries to marry off his daughters and instill in them a sense of tradition in the face of growing anti-Semitism in Czarist Russia.

Monroe, the leading actor, is no stranger to the stage after starring in roles like Simba in the Drama Club’s 2017 production of “The Lion King” and playing the part of Smee in “Peter Pan.”

“I’m excited to be back and to have a character that interacts with the audience more than my other characters have. Tevye, my character, has a very wide range of emotions that I am excited to use in order to give the audience a captivating performance,” said Monroe.

The cast will have rehearsals each night after school until 6 p.m. leading up to the live performances on October 20-22.

“I hope that everyone that participates has a good time and the audience enjoys watching,” said Drama Director Maria Wishart.

For more information about the upcoming musical, contact Wishart in-person or via email. 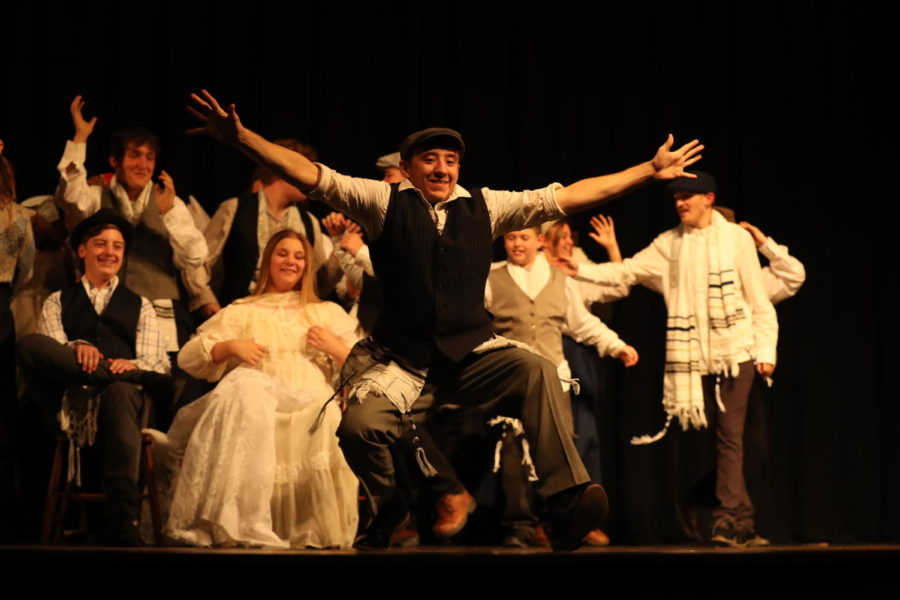 Senior Adin Monroe as Tevye dances at the front of the stage in celebration of the wedding of his daughter Tzeitel and Motel.

Last week, Thursday through Saturday, the PHS Drama Club performed “Fiddler on the Roof Jr.” on the Uyesugi Auditorium stage.

The plot followed senior Adin Monroe in the lead role of Tevye, as he played matchmaker with his wife Golde, portrayed by senior Isabell Shipman. Their daughters, played by eighth graders Cheyenne Carter and Piper Frank, along with sophomores Mary Cook and Lilyanna Beatty, faced the challenge of convincing their father to let them marry for love instead of marrying for money.

The story is set in pre-revolutionary Russia, specifically in 1905, in an impoverished Jewish village. As the tale progressed, the familial, financial and faith based struggles of Tevye, his wife and his children were laid out.

Differences and inequalities in the roles of men and women were also depicted. These hardships were contrasted with warm portrayals of the Jewish culture, community and tradition and the sense of unity within them. Anti-semitism, or prejudice against Jews, was also shown — ultimately ending the play with actors showing how Jews were forced out of Russia.

Although this was a smaller PHS Drama production in comparison to previous plays, the cast managed to both put on performances and learn a lot about how Jews faced adversity throughout the years.

“I’d say my favorite part was learning about the tie-in between the songs that we were singing and their relationship to Jewish culture. It was very enlightening to see that the songs [from the musical] that I had grown up listening to weren’t just songs, but were reflections of how real Jewish people felt at that time,” said Monroe.

Thank you for your donation!