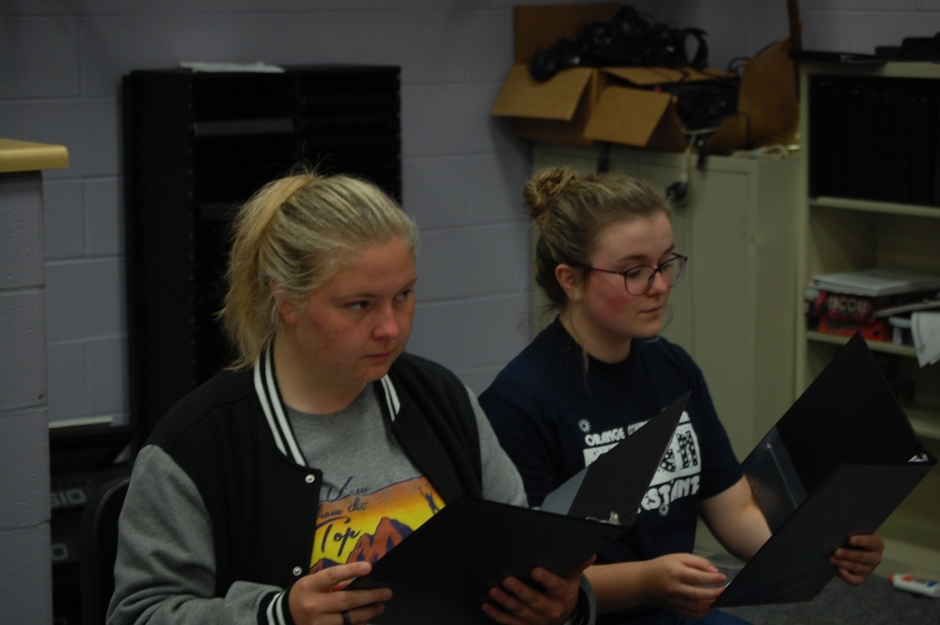 Senior Jillian Keen has a very special and important role in the Pride of Paoli’s show this year. In the first part of the show, Jillian sings while junior Hunter Roach plays the soprano saxophone. The song she sings in the duet is called “Pan’s Labyrinth Lullaby” from the movie Pan’s Labyrinth. Band director Ben Werne knew Keen had an amazing voice from hearing her perform with the jazz band and had the idea of using a lullaby for Keen to sing in the show.

“When I was picking music for the show, I needed to find a mysterious, dark sounding beginning, and I kept coming back to the Lullaby from the movie Pan’s Labyrinth. It has a female voice singing the tune, and I decided to use it and have Jillian sing it,” said Werne.

Keen uses a recording of the lullaby to help her improve on her singing. On competition days, she drinks a lot of water and tries to save her voice. Keen also hums softly on the way to warm-ups and the performance to prepare her voice before she starts singing. She makes sure she’s well rehearsed so she’s not as nervous when it comes time to perform.

“Singing in front of audiences has always made me nervous, but at the same time, I live for the feeling, especially when I’m well-rehearsed. It makes me feel as though I can help people connect to what I am singing,” said Keen.

Keen’s solo adds an effect in part one that creates a certain mood. The lullaby has a dark and mysterious sound, which works perfectly for the beginning of the show. Werne wanted to add something unique in the show that other class D bands did not have.

“I think the vocal and soprano saxophone duet provides a very interesting timbre and texture in the opening of our show that not a lot of other class D bands can create. It is something unique to us and impacts the show positively,” said Werne.

Having a vocalist in the show is something new for POP and its audience. Audience members can be more interested by an actual person portraying the notes rather than an instrument. A vocalist can give an effect to the show that instruments cannot.

“I believe that having a vocalist play the part can connect many on such a great level. Playing an instrument is one thing, but you can do so much with singing to get people intrigued and connected to what is being performed,” said Keen.

Keen’s vocalist skills add effect and create the right mood for the beginning of the show, which will continue to impact the performance throughout the season.