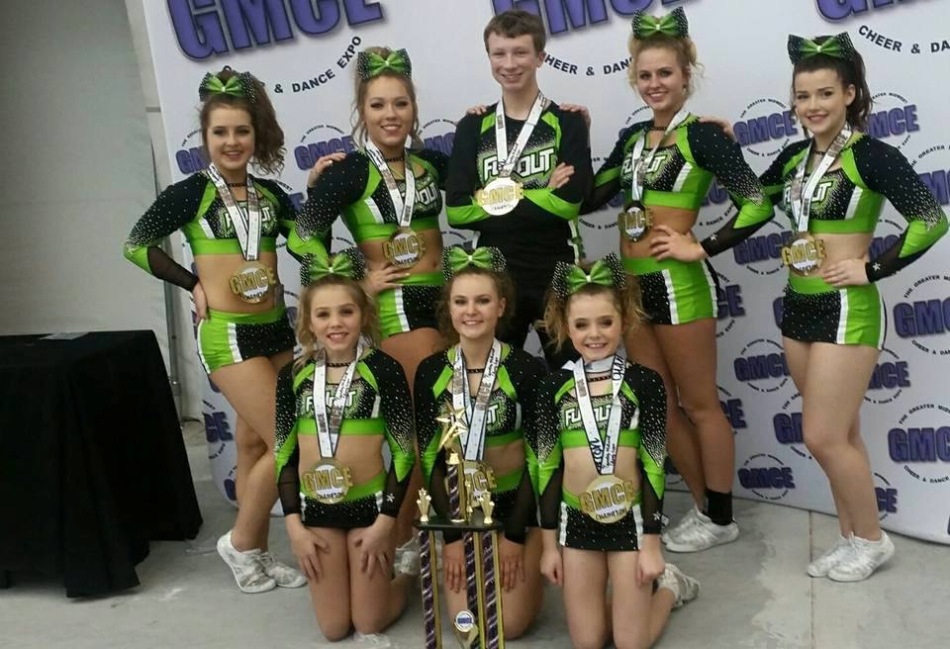 When senior Joni Blackburn steps onto the cheer mats, the rest of the world fades away. Worries about yesterday’s AP biology test slip her mind, and her speech homework is forgotten; it is just her and the rest of her team.

“I am disconnected from the rest of the world, and all that matters is me and my time,” said Blackburn. “No matter what is going on in my life, when I walk into practice and tumble or stunt, all my problems seem to fade away. The best thing about cheer is how happy it makes me.”

Blackburn started cheering when she was three, when her mom enrolled her in gymnastics with her sister, Tara.

“My sister started to do gymnastics, so my mom decided she should put me in it too. My mom wanted her children to have choices when they got older and to find something they enjoy doing. I went to a church that had a ballet studio and gymnastics gym in the basement. She put me in ballet, tee-ball and basketball, but nothing made me happier than gymnastics and cheer,” said Blackburn.

On Tuesdays, Thursdays and Sundays, Blackburn can be found at Full Out Tumble and Cheer in Jasper, where she has been cheering since she was twelve. She also cheers with Reign Athletics, located in Chicago, Illinois.

“Patrick Williams, the head coach, is our choreographer for Full Out, and he invited me to be on his team when he realized that I will have never been on a Worlds qualifying team before graduating. He told me he loved my attitude and skills,” said Blackburn.

At Full Out, Blackburn is on the Lady Lime team, a level three all-girl large, and the Vendettas team, a level five restricted all-girl medium. At Reign, Blackburn is on Valor, a level five coed medium. The higher the level, the more advanced the team is. On Lady Lime, there are 27 other members, and on the Vendettas, there are ten other members. On all teams, she is a backspot. As a backspot, Blackburn is expected to count for the other bases and the flyer and also lift the flyer to help them with weight.

“Throughout my years of cheer, I have had roughly thirty routines. Picking a favorite routine can be hard since there are so many parts to it, but if I had to choose one, it would be my routine with my previous team Black Hearts and Lady Lime last year,” said Blackburn.

“The routines are just so fun, and I made important memories with the people on the teams. Last year will always be remembered as Full Out’s big break to becoming a known gym around the country,” said Blackburn.

Although winning second is an accomplishment, not taking first place was upsetting for Blackburn.

“Sometimes we don’t live up to our full potential, and our coach knows it. When we are in competition season and we are having a rough practice, our coach is sure to take it hard on us. The practices are brutal and feel never-ending, but we all know that at the end of it, we’ll be amazing,” said Blackburn. “Knowing we were so close to first was thrilling, but it was also very disappointing knowing that first was so close.”

Blackburn’s favorite memory from her time in cheer is from her first competition with Full Out when she was twelve.

“It was my first year at Full Out, and I was on a senior team. I was the smallest girl, absolutely terrified behind stage, and I started bawling my eyes out. Two other girls on the team, Natalie and Abby, who are both in college now, said to me, ‘You are the most talented and devoted twelve year old we have ever met. You are not alone out there. You have your whole team here with you. We will not let you down; you just do your job and everything will be okay.’ That’s when I realized my cheer family is a forever family, and nothing will ever live up to the amount of love I have for my cheer teams,” said Blackburn.

When it comes to cheer, Blackburn’s biggest supporters are her “littles,” or the youngest members on the team, as well as her family and friends.

“The little girls in the teams lower than mine and the young ones on my team look up to me because I’m a senior. They always want a picture with me, ask me for help and cheer for me during a routine. That support always warms my heart,” said Blackburn. Her friends and family have always stood behind her and been there to cheer her on as well.

“My family has always made sure I had cheer in my life, and through fifteen years, my mom has only missed two competitions. My friends know everything there is to know about cheer and come to my competitions when they can. They always make sure I put cheer first because they know how much I love the sport,” said Blackburn.

Blackburn’s time with her teams is almost over, but she knows this isn’t the end for her.

“I have planned to attend either Purdue or IU, and I intend to cheer to make sure I do not stop trying to make myself better. My All-Star cheer career may end this year, but I still plan to cheer, so I don’t have to stop just yet,” said Blackburn. “Even though it’s not over yet, I know I will miss everything, the people on my team, the drives to Jasper, the smell of hairspray that chokes me backstage, the feeling of nerves before competing, the hot summer days full of sweat and frustration because we’re not perfect yet, the parents I am great friends with, the feeling of winning a competition and the amazing coaches that have never given up on me. Having to leave cheer is going to be like the hardest breakup I have ever had to deal with.”